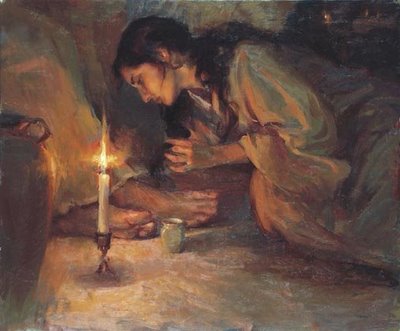 “Why was this ointment not sold for three hundred denarii and given to the poor?”

It wasn’t Jesus who said this; it was Judas. As far as he was concerned, pouring expensive ointment on the feet of Jesus was a waste. Better to sell it and distribute the cash. Judas had no time for ‘Divine Wastefulness’.

There is a lot of waste and redundancy in nature. Many plants, for example, toss off bushels of seeds, most of which never take root and grow. Why has God created such a wasteful natural economy? Couldn’t we have gotten by with a few less snowflakes, flowers, mountains or lakes? Didn’t God go a bit far in creating such a luxurious world?

A man who was raised during the Great Depression once observed that his family saved everything from bits of string to used nails and old boards. In later years, after the Depression had lifted, he continued to save nearly everything. He spent money on only the necessities and was critical of anyone who spent in excess, as he understood it.. He allowed his experience of want to overshadow his abundance.

Surely, God expects us to use good stewardship and wisdom when we spend money, even for the church. But there is also such a thing as thinking we are economizing when we are simply being stingy.

God has gone over the top in providing for us; an abundant world points to an even more abundant grace. Many set the parameters of their generosity based on the shifting tides of the world’s economies. God’s people set their course for living by looking  to the economy of ‘Divine Wastefulness’ and the extravagance of God’s amazing grace, revealed supremely in Jesus Christ.