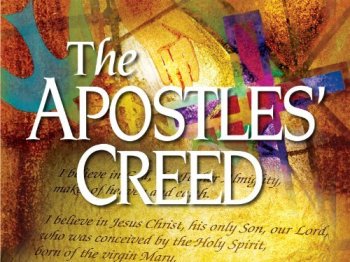 For the next couple of weeks I am commenting on the articles of the Apostle’s Creed. This is for my benefit as much as anything. My remarks are organized only because they are following the outline of the creed. So while they are not systematic, I hope they are not rambling either! I’m giving myself a refresher course and you’re invited to come along. And as you do I trust these few words may contribute something to your understanding of what it is to have faith in the God of Jesus.

Whenever the weekly lectionary presents me with a text on hell, I am tempted to sidestep it and look for another. Preaching on hell in the post-modern world is a bit like telling scary stories to frighten children. It is hardly the proper subject for the mature and enlightened. Millions of people, both within the churches as well as without, will hear no talk of hell for they are quite certain it does not exist.

In the early 1980’s a group of us toured what was then East Germany. it was the 450th anniversary of Martin Luther’s birth and most of the places where Luther lived and worked were in the eastern part of that country. One of our stops was the concentration camp at Buchenwald. As we walked over the ground which had been the scene of senseless, premeditated mass murder one of our group said, “It must have been hell.” It was the right choice of words. Nothing else would do. The words written over Dante’s gate to hell could have been written over the gate to Buchenwald, “Abandon hope all you who enter here.”

We live close together on this tiny celestial ball. Our experience of being together may teach us that even as we attempt to create our versions of heaven on earth we also create our versions of hell on earth. We may not hear this in the churches anymore but television, movies, novels and plays scream these themes at us day and night. We desire friendliness and recognition but all too often we receive – and give – contempt and suffering. We turn each other’s lives into a living hell on such a scale the sheer ordinariness of it is staggering.

Theologian Jurgen Moltmann has written, “What we have dismissed as a fairy tale is actually quite near, as near as our desire to live and our not being able to live, our desire to love and not being able to love. This becomes the anguish that has no name. Its thorn is guilt, the fiery torture of a bungled life. That is why all hells depend on us. “I do not do the good things I want to do; I do the wrong things I do not want to do” (Romans 8:19).” We may say about the Buchenwalds and the Auschwitz’s of this world, “Never again.”  But on what do we base our assurances? Are we safe from ourselves?

Jesus came proclaiming and living among us the nearness of God’s kingdom. Yet we made His life unbearable, finally giving Him a taste of hell on the cross. One more victim of the death dealers. What made Jesus’ death unique, however, is that this one who experienced profound abandonment (“My God, my God, why have you forsaken me”), is the same one who lived in the full consciousness of God’s presence (“The Father and I are one”). Through this experience of utter abandonment with the full knowledge of God’s nearness Jesus descended into the deepest torment of hell.

This is why Christians have taken such comfort in the knowledge that the just and righteous one was abandoned to hell’s fury. For if the Son of God, in whom God and life in their fullness dwelled, was subject to death and the deepest torment of hell, we also who long for love and life but too often receive or deal in contempt and death may no longer look to ourselves to break the impasse of evil. Instead, we are summoned, as Luther proclaimed, to “Look to the wounds of Christ, for there has your hell been mastered.”

1 thought on ““He descended into hell…””