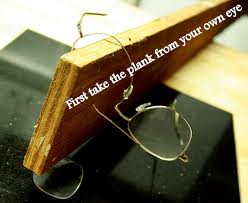 “Do not judge, or you too will be judged…first take the plank out of your own eye, and then you will see clearly to remove the speck from your brother’s eye.”

In my mid-sixties I have entered a time in life when reminiscing becomes more poignant.  I can see far more clearly the carefree days of youth, when I threw myself into the maze of experience, confident that the future was now and all that mattered was the present. Decades of living and aging have tempered this rashness until now there is a sobriety and humility about life.

The assertions that drove me to selfhood and independence also turned out to be a willfulness that took me beyond the restrictions and standards meant to keep me safe into places I should have avoided, and steered my life in ways both great and small onto the shoals of grief and heartache. And when I began to come to my senses, seeking a solid road of abiding values or an unbroken ascent to a promising future, I discovered that in a thousand ways the downward pull of the world was more than a match. It was then that life became a juggling act of living with the contaminations of compromise and the  tempering of disappointment .

I would argue that in some measure this describes every human life. Although the details vary, the dynamics do not. Youthful idealism may have its brief moment but every person eventually must face the corrosive effects of life, the very real dimensions of loneliness, fear and failure, the destructive and deforming contagion of willfulness.

A lot can be said about this but I want to make a singular point. I have been in the pastoral ministry long enough to have observed that far too many people in the church seem to have no capacity to recognize this struggle in the lives of others, nor do they honestly confront it in themselves. The church seems to often to be a place where it is permissible to come down on the defections of others, thanking God we are not like them, as if we are not bound in our own willfulness and pretensions.

Christian people are to take their cues from the one who went to the Cross, the one who said, “Do not judge, or you too will be judged…first take the plank out of your own eye, and then you will see clearly to remove the speck from your brother’s eye.”

The convoluted shamble of your life, however well you may be hiding it, has only one anecdote; the contagion of God’s love and mercy in Jesus. And for this anecdote you can offer nothing. It is God’s free and gracious gift to you. It is this love that restores us, not to idealism but to hope. For that hope cannot be compared to the frantic idealisms of the world. It is rooted in God’s promises and it will never disappoint.