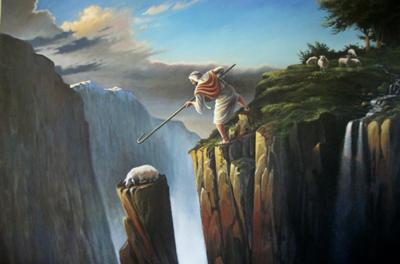 “The Son of Man came to seek and to save the lost.”

The text above is from the story Zacchaeus, the little man from Jericho who climbed a tree to see Jesus. It’s a good story and you may remember the children’s song based on the incident; “Zacchaeus was a wee little man, a wee little man was he”, etc.

Zacchaeus was a rich man as a result of his legalized plundering of the people. He was a tax agent of the hated Romans and despised by his fellow Jews. His name must have seemed to them the ultimate irony. In Hebrew Zacchaeus means ‘pure and righteous one.’

As Jesus made His way through Jericho, accompanied by the good citizens of the city, he came upon the little man in the tree. Without hesitation Jesus invited Himself to lunch at the home of Zacchaeus. This would have been a bit like your pastor sitting down to lunch with a member of the mafia. You just don’t associate with these people, let alone break bread with them.

Years ago, when I first came to Newport Beach, my guitar and I showed up every week at a local roadhouse for a blues jam. I played there off and on for a couple of years until the place closed down. One Sunday morning I was approached by a member of my congregation (who has since gone to the Lord) who expressed grave concern that I would inhabit such a place. It didn’t look good and it didn’t reflect well on the congregation, I was told. On the contrary, I replied. What better reputation could you possibly have than the very reputation your Lord acquired?

Jesus got Himself into all kinds of trouble because He worked the margins. Read the gospels. See for yourself.  He sought out all kinds of disreputable, grungy people who were easy for the respectable folks to forget. It was scandalous that a man who claimed to speak for God inhabited the lives of sinners with such ease. It is important, even crucial to notice that the marginalized and despised ones were the very ones who responded most eagerly to Jesus. All they had known from the ‘religious’ among them was scorn and rejection. In Jesus they found a friend and a love that made possible an authentic renewal of life.

Postscript: On one of my last visits to the roadhouse two of us were sitting at a table nursing a beer and talking about how much we were going to miss the place. My new friend, who I had been jamming with off and on for months said, “You know, if I had known you were a pastor before we had played together a few times, I wouldn’t be sitting here with you.”  Then, for the next hour or so I listened as he spoke of an abusive childhood, run ins with the law, two failed marriages and a young daughter who he had never seen. For my part, I told him about Jesus. How he never gives up on us no matter how busted up our lives may be and that we may always begin again. As we left that night we embraced. Tears were in his eyes.

About six months later I received a note in the mail. My friend had moved to be near his child, was working at a good job and for the first time in his life, was attending a church. He had also found a local blues bar where he and one of the associate pastors were playing regularly…and taking every opportunity to speak with others about Jesus. You gotta love it!

“May the peace of Gods that passes all understanding keep your hearts and minds in Christ Jesus our Lord.”